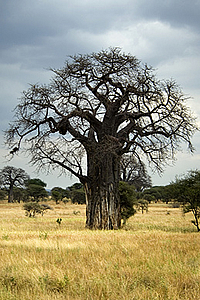 One of a number of wildlife conservancies scattered around the region of northern Tanzania, Tarangire National Park is not by any means the largest, and nor the most popular in the region, but it does have the advantage of being relatively untrammeled, and having within it all the aspects that one expects from an East African wildlife destination.

The principal feature of the park is the Tarangire River that runs through it. The landscape has a standard African plains aspect with low thorn scrub and baobabs interspersed with acacia woodland. It is made up principally of undulating plains with two large pans that form wetlands and swamps during the wet seasons.

The conservancy itself covers an area of approximately 1000 sq miles, and is most active during the dry season (June-September) when wildlife are drawn into the park in search of water as seasonal sources dry up in the countryside.

The main gate is situated a 2 hour drive southwest from Arusha, which makes it easily accessible as a safari option after a visit to Kilimanjaro, or alternatively as a quick substitute for Serengeti and Ngorongoro if time is short. The Big Five are present in good numbers, with elephants a common sight, and lions, buffalo, leopard, cheetah and white rhino also frequently seen.

A number of other local antelope species are also represented. These include wildebeest, zebra, eland, buffalo, oryx, hartebeest, kudu, waterbuck and impala. The area is also a popular and fruitful birding area, with season wetland species present in good numbers

Accommodation in an around the park is provided by several basic campsites, supplemented by tented caps and exclusive lodges both within and without. There are a variety of alternative activities to game drives available, including game walks and cultural excursions to Maasai and Barabaig villages and sites of ancient cave art.