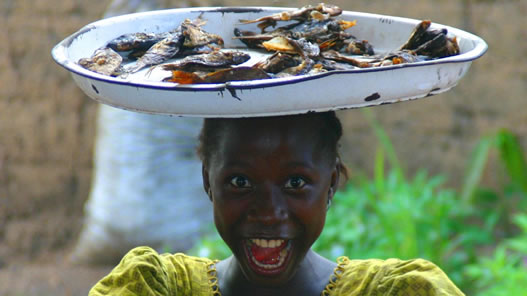 19th century African explorer and travel writer Mary Kingsley felt a particular aversion to corrugated iron. It was out of this material that the entire colonial structure of the region seemed to be built, and which was the only blight on her otherwise lifelong love affair with the West African Coast. The Sierra Leonian capital Freetown came in for particularly fulsome criticism from Ms. Kingsley in this regard, and in the century or so since she drifted into port, and remarked with distaste on the generally ramshackle appearance of the capital, very little seems to have changed.

Other writers have also dwelt on the mixed virtues of this oldest British territory on the West African Coast. Graham GreeneÂs Heart of the Matter exposed with merciless candour the alcohol, fever, heat and sexual misadventure among the Europeans posted to this most derelict of Colonial Service assignments. In those days Sierra Leone was something of a liability to the Crown. What had once been a convenient location to resettle slaves freed by Atlantic naval patrols became a hostile backwater to be governed with the least possible interest, and abandoned at the earliest opportunity.

In more recent times one of the worst of African civil wars played out in Sierra Leone. The easily accessible wealth of diamonds purchased Cold War surplus weaponry that set in motion one of the darkest chapters of African history. That period has now passed, but a deeply wounded nation still displays itÂs livid scars, and it will no doubt be years, perhaps even generations before this prince of African unfortunates can fully recover.

Travel To & Within Sierra Leone

Why Travel To Sierra Leone

For all this there are still a few good reason to make the effort to visit Sierra Leone. Peace is alive, the country is in recovery and tourist dollars are a welcome relief. A factor affecting African insecurity is usually hostile borders or acrimony between neighbours, and with an equally determined recovery underway in Liberia to the east, and a generally healthy political process on track in Guinea to the west and north, the chances of any unexpected incidences, or sudden upsurge in violence is very small.

The country has a fairly mixed ecology with a varied coastline and a wide expanse of coastal plain and mangrove forest. Inland the country is characterised by lowland and highland forests, with a belt of mountains from which the highest point of Mount Bintumani rises to 1948m (6390ft) above sea level. Overall the colour is green and the texture lush, with the generally dense verdure thickening considerably to the northeast along the border with Liberia.

Although the national infrastructure is generally in poor condition, there are a surprising number of reserves and conservancies, some in better shape than others, with a growing list of activities and opportunities available to get out and see the countryside. It seems also that conservation efforts in the aftermath of the civil war have been intensive in a nation with many biodiversity hotspots. Chimpanzees, for example, although a popular source of bush-meat, are not as endangered here as elsewhere, and are protected by a prohibition against capture or killing.

The main attraction of the country is probably its beaches, however, which, by the nature of West African society, tend to merge with the most active, colourful and vibrant of local communities. There are a good number of beach and coastal destinations, some extremely remote, and others with surf potential which is a growing sector of the market in West Africa. Although access is never particularly easy, Sierra Leone also has a number of superb nature and game reserves. Some, like the Tacugama Chimpanzee Sanctuary, are reasonably well organised and supported, with others such as the Outamba Kilimi National Park and the Loma Mountains Forest Reserve fairly remote.

Again facilities are crude, often non-existent, but the industry in Sierra Leone is still in incubus, which for the venturesome travellers offers rare opportunities. Sierra Leone is probably not a destination for comfort loving tourists looking for a short vacation, but is a destination for travellers, and for nature and ecology students and enthusiasts in search of the bigger picture.

It is not possible for a nation recently emerged from civil war on the scale of Sierra Leone to be entirely safe, and it is not, but a point worth remembering is that civil war in Africa is unusually internecine, and rarely involves outsiders. So barring the risk of being caught up in fighting, which these days is very rare, foreign visitors are usually not the targets of aggression.

What is an inescapable consequence of civil war is dire and entrenched poverty, out of which the inevitability of crime emerges. Careful precautions are necessary when travelling in an around the urban areas, which should be avoided at night, and certainly movement on foot is to be undertaken in the towns and cities with caution. Sierra Leonians are as a rule a friendly and outgoing people, but circumstances are difficult, and most are alert to the opportunity for pilfering or petty theft.

Illegal roadblocks in the outlying areas are a for-profit enterprise, and although some youths manning these may be armed, the threat is low, the coercion friendly, and the expectation absolute. Use your discretion.

Homosexuality is illegal in Sierra Leone

Malaria and most waterborne diseases are common in Sierra Leone, including cholera.

HIV/AIDS prevalence is comparatively low according to known assessments, but caution in all aspects of sexual activity and interaction is a matter of course anywhere in Africa.