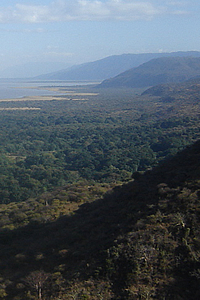 Quite a few of the promotional superlatives describing TanzaniaÂs reserves and eco-destinations draw on Ernest HemingwayÂs wonder and he toured the region, and reflections that he committed to prose in his iconic memoir The Green Hills Of Africa. The Lake Manyara region was one of the places that particularly captured the imagination of the great writer, and quite rightly so.

The approach to the park is one of the outstanding scenic drives of east Africa, with views of the Great Rift Valley running north to south and disappearing at either end into a murky haze. The road descends slowly to the floor of the valley and the head of Lake Manyara.

The defining feature of the park is lake Manyara itself, a freshwater alkaline lake that covers more than half the area of the park. Much of the land area is defined by the western wall of the great rift valley in the form of slopes that lead down to an extensive floodplain where most of the wildlife activity of the park can be found.

Within the limited area of the park (132 sq miles) an extraordinary diversity habitat supports an equally extraordinary diversity of flora and fauna. Entering the park at the main gate the road passes through an area of lush forest sustained by groundwater and streamlets issuing from the lava-rock of the highland and saturating an area at the head of the lake.

In sharp contrast to this is the grassy floodplain that characterizes the lakeshore up to the leading slopes of the escarpment. Here the view extends across the lake to the volcanic peaks that rise out of the great Maasai Steppe. In between the escarpment and the floodplain can be found a narrow belt of acacia woodland, which is the habitat of Manyara elephants and the retreat of the parks famous tree climbing lions.

There is as a consequence of this a fusion of wetland, plains and woodland species of both animal bird life. The lakeshore is often fringed with pink flamingo and many other wading species, while the escarpment is home to raptors with in between the rich variety offered by plains, grassland and woodland. The plains are dotted often with buffalo, wildebeest, zebra and giraffe, with ubiquitous troops of baboons and vervet monkeys. Many smaller and more secretive species such as bushbuck, aardvark, aardwolf, pangolins, civets, leopards and wildcats are present. Waterbuck are frequently seen.

Campsite and Banda accommodation is available in the park as well as a luxury tree-house camp. Surrounding the park are several private lodge and tented camps. Activities include day and night game drives, canoe game viewing, cultural tours and forest walks.

For optimum game viewing the dry season between July and October is the best time to visit. For the best seasonal bird-watching the wet season between November and June is advised.