What Barack Means To Africa 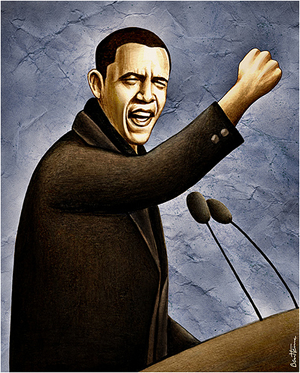 Despite the fact that Barak Obama clearly owes more to white, middle class academia than the trenches of black social politics, or for that matter the taut process of class, race and tribal politics of Africa, his election to the highest office on the globe has been greeted with great jubilation in Africa, as it has everywhere.

This fact probably defines the importance of ObamaÂs election more than anything that his two terms in office will be likely to achieve. The symbolism of his rise to power in a world grappling with almost insurmountable human, economic and political problems is profound. It is profound mainly for revealing to outsiders the latent structure of the United States, and for the hope that it gives the rest of us that Big Brother might abstain for a political generation from being such a bully and help his poorer cousins worldwide across the economic threshold.

There are few cousins, figuratively and literally speaking, poorer than those in Kenya, and the minority Luo from whom Obama has come are certainly not among the most gifted of KenyaÂs many ethnic groups. It is a matter of speculation what ultimately Obama will be able to do for the Luo, for Kenya or for Africa as a whole, because strangely African/American statesmen and politicians have never been particularly well received in Africa.

The reason for this is that African abusers of power, and there are a great many of these, have always been able to deflect western criticism by claiming neo-colonial and neo-imperial overtones to every concern raised. If a white politician or civic leader from the west ventured to criticize Africa it has always first and foremost been condemned as an act of racism.

When such black politicians as Condoleezza Rice and Jendayi Frazer, Assistant Secretary of State for African Affairs, have leveled criticism at leaders such as Robert Mugabe, they have been labeled Uncle Toms, or black stooges, and it would be a terrible shame if Obama was to be regarded as an Uncle Tom when clearly neither he nor Condi Rice or Jendayi Frazer are any such thing.

As a consequence of this most African American establishment figures have tended to keep Africa at arms length. It is a hot potato that few have wanted to come to grips with. None so far, however, can claim to be ÂAfricanÂ in quite the way that Barack Obama can, for Obama has a Kenyan fatherÂnot an immigrant, not an erstwhile slave of misty generations past, not an African academic or diplomat languishing at the United Nations, but an honest-to-goodness, full blooded Luo male of unadulterated Kenyan descent. Barack Obama has a mainline connection to Africa, and Africa is waiting to see what this will mean.

Who are the Luo?

Barack ObamaÂs father was a member of a minority group who call the east shore of Lake Victoria their home. They were originally among KenyaÂs Nilotic immigrants, being able to trace their origins to Southern Sudan. This means that the Luo are not of the main Bantu strain of African ethnicity, and speak a language not directly related to the main African language groups. They are related to small pockets of Nilotic peoples scattered throughout East Africa, including the Maasai, Turkana and Samburu peoples of southern, central and northern Kenya.

The Luo are nowadays recognized as the third largest ethnic group in Kenya, and are not unfairly represented in national business and politics. However undeniably their heartland is western Kenya, and it is there that they dominate both fields.

The Luo have a reputation for being spoilers in Kenyan politics, and the most famous Luo currently serving is Kenyan Prime Minister Raila Odinga, and no word better describes his approach to his office than ÂspoilerÂ.

The Luo comprise some 40 separate groups interlinked by language and tradition, and bound by age group guilds and ruled by chiefs known as ruoth. The warrior class was known as thuondi, and the spiritual theocracy jabilo.

How Luo is Obama? 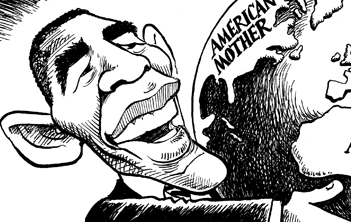 Probably not very, and it is likely that he has learned a lot more about his African ancestry in the last two years than at any time previously. Dreams from My Father: A Story of Race and Inheritance was written as a reflection upon a mixed race heritage, a conflict that is perhaps due shortly to be revisited.

This knowledge will be demanded of him when he makes his first state visit to Africa, which will be a momentous moment for all mankind. It will however need to be carefully stage-managed. Africa is keen to welcome Barack Obama home as one of itÂs most gifted sonsÂ..so long as he keeps his mouth shut and respects the tried and tested Âsee no, hear no and speak no evilÂ principal that defines the management of internal African affairs.