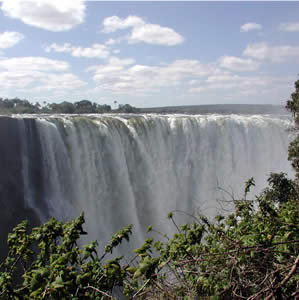 David Livingstone, who was a man not known for poetic turns of phrase, said of this most iconic of southern Africa features, that so lovely was it that angels must have paused in their flight. He named it Victoria Falls after the ruling British monarch, upon whom angles seldom gazed, while the local people named the falls Mosi-oa-TunyaÂor the Smoke that Thunders.

There is no doubt that this is one of the worldÂs most breathtaking natural features, a mile wide, 360ft spectacle of the great Zambezi River plunging into the Batoka Gorge, which is in fact a series of 7 switchback gorges that within itself is a major geological feature. The falls are situated on the mid-Zambezi River, in a region gifted with great natural beauty and bounty. The falls enjoys some of the best preserved and most easily accessible game viewing facilities on the continent, as well as a wide spectrum of hospitality and general tourist facilities to make this arguably one of the best known and most visited destinations in Africa.

Victoria Falls, or Vic Falls to her many devotees, is so much more than a platform to gaze at one of natureÂs wonders. It is the adventure/adrenalin capital of Africa, making it probably one of the most exciting places on the entire planet. Victoria Falls, both on the Zambian and Zimbabwean sides, marks the crossroads of almost every overland journey form north to south, so the towns of Victoria Falls and Livingstone are Meccas for overland trucks, with at any given time some hundreds of these parked up at campsites and hostels on either side. These trucks feed the hungry beast of the adrenalin industry, the flagship of which is the Zambezi whitewater rafting. 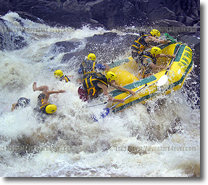 There are several companies operating on the river, based both in Livingstone and Victoria Falls, with most of the big international names represented, as well as a handful of local hybrids. Every lodge, hostel or hotel has its adventure connection, and riding a flurry of shockingly energetic rapids for an adventure packed day makes this the first choice of just about everyone passing through.

Afterward there is much else to consider. The 360 Victoria Falls Bridge bungie jump, which, if not the highest in the world, is one of the best known and certainly the most spectacular. On a sliding scale its hard to choose between this as the whitewater as the biggest rush, but the runners up are the mircrolite and helicopter flights over the falls (particularly on a full moon), the obligatory booze cruise on the upper Zambezi, and then the benign option of game viewing and relaxing and a generally very pleasant holiday/safari environment. There is also game fishing on offer, with the legendary Zambezi Tigerfish the most sought after fare, and ski boat flips in the gorge, and of course the options of taking your boogie board, kayak or anything else you have on hand down the gorge as a private individual. 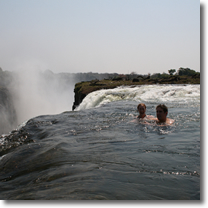 With all this on offer, and with perhaps the history of being the oldest tourist destination the region, Victoria Falls has every conceivable hospitality option available in abundance. The Zimbabwe side has a longer tradition of high class hospitality, with the venerable Victoria Falls Hotel leading the pack, but a selection of country clubs, casino hotels, game lodges, tourist hotels, backpackers lodges and hostels as well as a selection of private guest houses and B&Bs proliferate.

The whitewater fraternity is largely what governs the optimum time to travel to Victoria Falls. At high water, during the wet season between late November and late February, water levels in the river are high and the rides downstream a little easier on the stomach. During the dry season the rapids are at their wildest, and for extreme whitewater enthusiasts this is the time to travel.

Besides these factors there are visitors flocking to Victoria Falls all year, and each month has something to offer that can be found nowhere else. The dry winter season between May and August is the most comfortable, with the wet summer season between November and February the hottest and most humid.

Victoria Falls is at the crossroads of north and south, so it is probably one of the most accessible destinations in Africa. Road services from all associated and adjacent countries are good, and an international airport is available in both Victoria Falls and Livingstone. There are train services form both Zambia and Zimbabwe, and almost every overland truck that burns rubber on a southern or east African road at one time or another checks into Victoria Falls.

Victoria Falls and Livingstone are tourist Meccas, so petty crime, exploitation and thievery are rampant, but violent crime is rare, and more likely you will be touted rather than mugged. Watch out though, and keep your wits about you, and donÂt splash your money, cameras or anything else about.