The Rwenzori Mountains Of Uganda 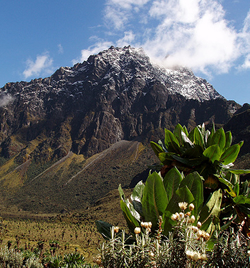 One of the last secrets of accessible African venture travel is the famed Central African Mountains Of The Moon.

The Rwenzori Range, straddling DRC and Uganda, is a rugged range of snowcapped peaks that, although not the highest, are without doubt the most rugged. The range is a sprawling conglomeration of peaks the comprise six massifs separated by heavily forested gorges and laced together by streams and alpine lakes.

The six peaks of Rwenzori are Mount Stanley (5109m), Mount Speke (4890m), Mount Baker (4843m), Mount Emin (4798), Mount Gessi (4715m) and Mount Luigi di Savoria. Obviously Mount Stanley attracts the greatest attention, and it is there that most climbers congregate if they are to say that they have summated.

The Rwenzoris is an unforgiving climb. This region of the Virunga Range experiences some of the highest annual rainfall rates in the world, and the ecological diversity that this creates is astonishing to behold, but a side effect of such enomous amounts of rain are the bogs. The bogs of Rwenzoi are ubiquitous. The Bigo Bog is the most extensive, and the one that climbers are most forcefully warned about, but no part of the mountain is without bogs, and almost no hour of the climb is spend without sloshing to some degree through mud.

The upside of this is that the kinds of numbers that flock to Kilimanjaro are absent in Rwenzori, and there is an air about the place of being right off the beaten track. It does hurt at all the Uganda is one of the most superb tourist destinations in Africa, and nor that the othe rthree big ones Â Kili and Mount Kenya, are not too far away. A Big-Three Safari is one of the those trips that very few people ever achieve, and if you want to do something in your travels that really is worth talking about try the Rwenzoris. You will never forget it.