The Paradise Islands of Mozambique 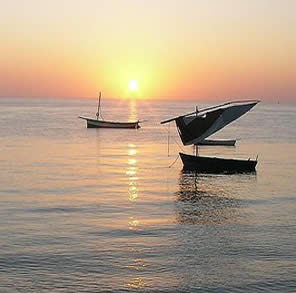 The coast of Mozambique is a region of multiple charms, with 2000km or more of beautiful tropical coastline, a growing number of blended beach resorts, camps and lodges, a history that is ancient by any measure, and a collection of islands that form part of the Bazaruto Archipelago that are aptly named The Paradise Islands.

This is one of MozambiqueÂs most attractive and important coastal towns, and is the main jump-off point for the Bazaruto Archipelago. It is situated about 20km east of the main coast road, and is nestled in the elbow of a sweeping bay that makes up the archipelago.

Vilanculos has since the cessation of violence in Mozambique been a magnet for white Zimbabwean and South African escapees and drop-outs. Around an early core of these has grown a community of lifestyle travelers that make up most of the camp, lodge and tour operators that now dominate the tourist industry. Expect to find a plethora of hospitality and atmosphere establishments, ranging from the local campsite, through the gamut of backpackers lodges and mid-range guest houses to a handful of designer lodges, all set into the gorgeous coastal landscape and catering to the highly discerning traveler.

Vilanculos is a both a functional and atmospheric destination, with an international airport servicing mainly South African traffic, and all the usual facilities of fuel, supermarkets, a small internet cafÃ© and a sprawling covered market that sells everything from foodstuffs to Chinese knockoff designer brands.

All in all this is a fine example of the groovy, open minded and mellow Mozambique coast atmosphere,. In keeping with its location, and its ÂmanyanaÂ sensibility, it is grubby, dusty, could use a general coat of paint and an all over clean up, but that is so much part of the atmosphere, and what places this little town squarely in tropical Africa.

The Bazaruto Archipelago is a finger of land that protrudes into the Indian Ocean from a point just south of Vilanculos town. The appendage is broken up into six separate islands, with the principal four being Bazaruto, the largest, Benguerra the second largest, and Magaruque and Santa Carolina being the smallest.

The area is characterized by a shallow stretch of sand shoals and tidal flats with the islands rising slightly above sea level and supporting a limited belt of vegetation. On the east side of the islands the sea bottom plunges to great depth in the Mozambique Channel that runs between the mainland and Madagascar, with the west side being sheltered, shallow and usually very calm.

The area is protected as one of the worldÂs most important marine national parks, and is home to a small number of surviving dugong that are a very rare sight these days. The islands also host a number of high end beach lodges and resorts that have tended to render the islands prohibitively expensive as an overnight destination.

The entire area is, by African standards, extremely well preserved, with a minimum of corruption and backroom politics involved in the allocation of permits and licenses for development. The result is that this is one of the few authentic tourist destinations in Africa that has managed with massive popularity to maintain most of its original charm, and what growth is visible is usually tasteful and restrained.

The islands offer a wide variety of hospitality options, which for the most part are very high end, but offer great exclusivity and a quiet and authentic tropical African coast experience. Most of these establishments are self contained, and offer all the usual activities of diving, snorkeling, big game fishing, horse-riding and dhow excursions, with the added attraction of relaxation in exquisite surroundings.

For the more budget minded traveler Vilanculos itself offers a much wider range of cheap and mid-range hosplaity options, and from there access to the islands is very easy.

On the whole the tourist industry in Vilanculos is very organized, and organizing such activities as diving, snorkeling, dhow safaris and coastal horse adventures is very east.

Vilanculos is serviced by good access roads and a very functional international airport.

As a last work it could be said that the coast of Mozambique has become a South African beachfront property, but if this is so then at least the advantage of this is that everything is run to the high standards that South Africans promulgate and expect, and that cannot be a bad thing.