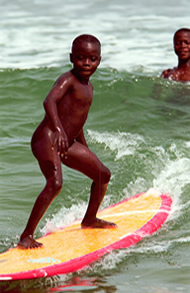 One of the most interesting and encouraging bits of news to come out of the growing African travel scene is the emergence of Liberia as a potential surf destination.

What is surprising about this is not so much that the wave potential along the 2500km West African coast is so good, but that a nation battling with such elemental processes of recovery and survival should have looked up from its labours long enough to notice the fact.

Liberia is like an abused child. It has been sodomized for so long by so many that the national psychosis seems too deeply entrenched to ever heal. Since the day that Charles Taylor reinvented himself as a Liberian techno-warlord, wave after wave of trauma have swept over the little West African nation, until it began to seem unimaginable that one race of people could absorb so much horror. The imagery that flooded out of Monrovia during the battles for control of that city was mind numbing in its barbarity. The heavily armed, drug dazed and pre-pubescent terrorists, with the power of life and death in their hands; the infamous snuff movie of Samuel DoeÂs final hours; warlords here and warlords there; and the wide eyed and terrorised civilians, circling like fish in a net, cut down and killed whether they turned to the left or the right.

And yet a Psychiatrist might be inclined to say that a simple ritual can heal the mind. Why not surfing? Why not infuse the already snappy, street wise and smart talking nation with a little bit of that West Coast groove? And why not dare to picture a surf shack or two on the beaches of Monrovia, or Robertsport, or any other of the many gorgeous beaches that line the Liberian coast. It happened in MoÃ§ambique. At the dawn of the 1990s there could not have been a nation more war weary, more broken and demoralized than MoÃ§ambique, and yet a decade later the beautiful islands and beaches of that nation are awash with luxury resorts, fishing camps, convoys of wealthy tourists and a bourgeoning and international tourist industry.

Rwanda is another example, and Uganda another. Africa, it seems, has a resilient root-stock. After the hottest fires, and the most scorched earth, fresh buds are quick to appear above ground the moment that a rain shower falls.

The notion was first aired by independent filmmaker Nicholai Lidlow when he released his groundbreaking film Sliding Liberia, that chronicled the journey of four surf bums on a wave odyssey of the still smouldering West African nation. Since then others have followed, and blogs have begun to appear across the web as a stirring of interest and curiosity is being felt throughout the global surf fraternity. Conditions are primitive, transport and accommodation non-existent, but the waves are there, and where there are waves there are surfers.

Look out for the day when package tours are selling on-line like hotcakes, and when ESPN is reporting the ASP World Tour from Monrovia or Robertsport. It could happen. Stranger things have.