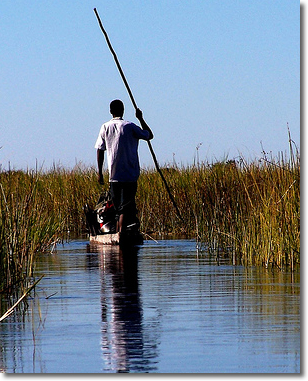 Situated in the far northwest of Botswana, the Okavango delta is arguably one of the most unique wildlife destinations in Africa. It ranks alongside Ngorongoro Crater, Etosha Pan and the great Niger ÂWÂ TransFrontier park system as an area of unique ecological importance, and something of a micro-habitat defined by very specific ecological conditions.

In the case of the Okavango these conditions are formed by the spilling of the Okavango River into the heartland of the Kalahari Desert, finding no outlet to the sea, and as a consequence forming a vast area of inland wetlands in an otherwise arid hinterland of stereotypical African savannah bushveld. Okavango is the largest of a handful of similar inland deltas worldwide, forming an area of natural irrigation some 15 000kmÂ² in extent. This area is increased significantly by seasonal flooding, with water over-spilling into Lake Ngami, which, along with the delta itself, is a remnant of a much larger ancient lake system that once covered much of the region. Lake Ngami has contracted significantly since its discovery in the 19th century, but remains an important part of the general habitat created by the Okavango Delta and its immediate hinterland.

The Okavango Delta provides a seasonal habit for a staggering diversity of African wildlife, with an even greater diversity of bird life. During the southern African dry season between April and November wildlife congregates on the fringes of the Delta as seasonal water sources inland dry up. It is a vital resource in particular for the large herds of elephants that migrate annually from the northwestern corner of Zimbabwe and congregate in large numbers in the delta region. More permanent inhabitants are such species as hippopotamus and Nile crocodiles which are a perennial presence.

The Botswana tourist industry is well organized and highly sophisticated, and a great variety of hospitality and tour facilities are available to handle just about every style or preference. From budget campsites in and around the local town of Maun to exclusive, luxury lodges and remote tented camps, and from cheap and cheerful tour operations to high priced, integrated fly-in safaris, there is an option for everyone.

On the whole the Botswana government tries to make a point of limiting the impact of mass tourism on the unique ecologies of the region, and in particular the delta, so the emphasis tends to be on high end travel, and although some accommodation is made for mass, budget tourism, the best is reserved the big payers.

The main and most popular activity on the Delta is a Makoro, or local dugout canoe safari through the maze of reed edged channels and islands that make up some of the more accessible sections of the Delta. Almost every tour operator working out of Maun will have a version of this trip, and it is arguably the best way to see and experience the delta on a reasonable budget.

At the higher end fly in or mobile safaris offer a huge variety of game viewing options, all with an option makoro trip thrown in, but usually also in association with a lodge or a tented camp.

Basically the reason you come to the Delta is bird and wildlife watching, and everything in one way or another revolved around this.

The campsites and overland truck stops on the edges of Maun are little party Meccas, and there is plenty of bar action to be found at just about any one of them. The hotel and bar scene generally in Maun and surrounds is very lively, and in between moments of awestruck wonder great deal of hedonistic indulgence is also common.

For wildlife viewing, and for the sake of general comfort levels, the dry winter months between April and October is by far the best time to visit. Wildlife will during this time be drifting in to take advantage of permanent water, and temperatures are cool, with humidity level low.

For the sake of optimum bird watching the west season from mid-November through to the end of February is the best time, although temperatures can soar to upwards of 100ÂºF, with stifling humidity.

You can fly in from Johannesburg or Windhoek on scheduled flights, but many tour operators offer direct fly-in safaris from many of the surrounding countries. The Botswana road system is very good, so driving in from Namibia, South Africa or Zimbabwe is easy. Coming down from Angola is less easy.