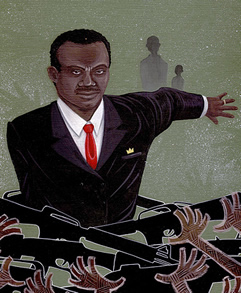 There are probably few people out there who have not at some point received a beguiling email correspondence from a dulcet West African claiming Christian values and a gargantuan stash of money somewhere that he or she is desperate to share. If so, and if you are foolish enough to follow it up, it is likely that in due course you will discover at the other end a Nigerian ÂbusinessmanÂ.

Nigerian internet fraud, or 419 Fraud after the relevant Nigerian legal statute, is nowadays an international business. It principally takes the form of what is known as Advanced Fee Fraud, but these days it can be anything from massive social security fraud in the UK to sympathy and confidence panhandling on the streets of just about any major city in the world. The issue of Nigerian internet and general fraud has been the subject of countless investigations and ÂstingsÂ over the years, and the media is replete with exposÃ©s, hard luck stories and warnings.

The favorite trick is to flood the information superhighway with spam mail formularized basically along the lines of a bureaucrat representing the forgotten wealth of some African demagogue. This demagogue, some real some fictional, died recently leaving a trunk full of cash in a safety deposit facility somewhere. In order for our new friend to discretely move the money he needs a trustworthy foreign partner who, in exchange for a multi-million dollar share, needs only to hand over his or her banking details.

There have over the years been some fairly high profile victims of this scam. Paris Hilton was one, who, feeling sorry, as she put it, for some hard luck fraudster, had one of her minor bank accounts cleaned out. She played the matter down, as might be expected, so no details of how much was lost were released, but doubtless for a Nigerian languishing in the heat of a Lagos internet cafÃ© it was quite a respectable haul.

The internet is also fairly well stocked with people who play these fraudsters with sometimes quite amusing results. Sometimes the scams are so ridiculously amateurish that it is hard to believe the effort can be worthwhile, but at others they are highly sophisticated, extremely effective and one supposes very lucrative.

Manchester United on the Frontline

One in particulate was recently exposed by the BBC in an elaborate sting operation. A Nigerian businessman had found a fresh and lucrative loophole by claiming to be able to arrange player contracts for up-and-coming Nigerian soccer players with major overseas clubs, including Manchester United. The BBC filmed a liaison with this man in a Lagos hotel, after which he was promptly arrested by a plain clothed Nigerian police detail, and driven away in an unmarked SUV. It is not difficult to imagine, however, that after a brief spell in a humid interrogation room an agreed amount of cash changed hands and our fraudster was back on the street.

The fact that this routine was devised and executed by a Nigerian falls very much into the stereotype of Nigerians as being sleazy and untrustworthy as a race. Normally one would be justified at this point in allowing some protest that this is simply not so, but that is a hard sell. Nigeria is arguably the most corrupt nation on the planet, and at every level of society corruption is more than just an industry, more than simply a means of survival, and indeed much more than a national institution. It is a pastime, a pleasure, a sport and a nationwide recreation.

At the bottom of the Transparency International Global Corruption Index Nigeria shares space with a number of her local and regional neighbors, and indeed the internet fraud market has been noticeably spreading lately to include among others such players as Sierra Leone, Guinea Bissau and Ivory Coast. From a travelers point of view this is the single most important travel warning that can be offered, not only regarding Nigeria, but throughout Africa. Even countries like Zimbabwe and South Africa that have until recently been relatively corruption free are nowadays slipping into the graft mindset, while others more established in the game like Kenya and Tanzania still lead the pack.

At all times when you are traveling in Africa you have to take with a gigantic load of salt anything you are told, and any advice you are given, and certainly never give out your bank details, your address or your telephone number to anyone. If you do you will doubtless never hear the last of it.