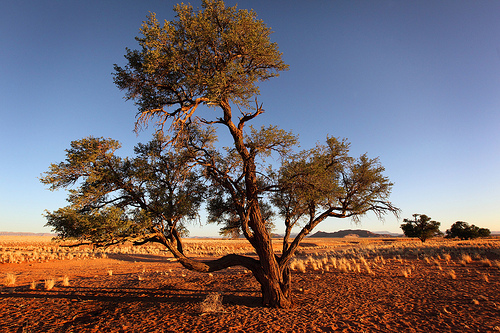 You’ve bought your airfare to Namibia. You’ve found hotels and booked adventure trips in Namibia and you’ve planned out what you want to see, do and experience in the country. But you might not have thought out what you’ll eat while traveling in Namibia. After all, Namibian cuisine isn’t exactly known around the world. In fact, most people have no idea what the cuisine of the country entails, which may be in part because it is so varied.

In southern Namibia corn, fish and chicken are staples, along with rice, beans, tomatoes and couscous. Fruits, like oranges, bananas, pineapples, kiwi, andÂ  avocado, are also available. As for Namibian meats, beef, ostrich and game meats are commonly served, along with fresh fish along the coast. Of course, what you’ll eat depends on where you go; the food in small towns, along the coast and at high end resorts will differ greatly from what you will find in the bush. Here food will be much more simple while in some towns, you’ll find a surprising amount of German influence, evidence of the fact that Namibia was once a Germany colony.

But Namibian food also has a stranger side. Actually the country serves up one of the most dangerous foods around the world.Â  The toxic giant bullfrog is a delicacy in its native Namibia. It is consumed whole, except for the organs. If eaten at the right time of year and only once mature,Â  it is benign (though maybe a little unappetizing). But if not, it can be poisonous and cause kidney failure or a burning and inflamed urethra. Of course, you can always just stick to the schnitzel if you’re not up for sampling potentially poisonous frogs.