Getting from Nairobi to Arusha 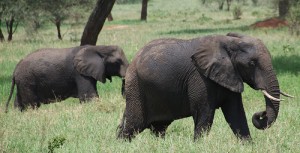 Nairobi is the capital of Kenya and one of the largest cities in Africa. It is the safari capital of Africa but tourists can also choose to check out the nightlife and cultural life. It is one of the best places to visit if you want to spend most of your time in nature.

Arusha is located in Northeast Tanzania and is the gateway to the popular Northern Safari Circuit. The city is situated at the foot of Mount Meru, Africa’s fifth highest mountain. The city itself is not very attractive but itÂs the stop before heading into the wilderness. But itÂs a fast growing city and that can be quite interesting.

The cheapest way to travel from Nairobi to Arusha is by bus. There are plenty of companies operating between the two cities which means the fares are low (from US$14.40 on way) and the service is good.

JKIA Jomo Kenyatta International Airport (NBO) is KenyaÂs largest airport and the busiest in East Africa. It is hub for Fly540 and Kenya Airways. The airport handles flights to/from other African countries, Middle East and Europe.

Arusha is served by two airports: Arusha Municipal Airport (ARK) and Kilimanjaro International Airport (JRO) ; but only the latter receives flights to/from Nairobi. Kilimanjaro Airport is the one which offers the connections between some of the best wildlife areas in Africa. It is not hub for any airline and receives limited flights from Europe.

Once at the airport, you can choose between a taxi or a shuttle to get to Arusha (some shuttles are free, some cost US$10 per person, one way).

Flights between Nairobi and Kilimanjaro Airport are operated by: Airkenya Express, Kenya Airways, Precision Air and Qatar Airways. During the dry season (May to October), expect to pay from US$226 one way (with a stop in Zanzibar, night stay required) on Fly540.

Buses from Nairobi to Arusha

There is shuttle bus service operated between the two cities by various bus companies. The travel time is about 5 1/2 hr Â 6 h. Here is a list with some of the companies:

Driving from Nairobi to Arusha

There are 270 km between Nairobi and Arusha so you can rent a car and drive the distance. However make sure to ask the rental company if you are allowed to take the car across the border.

The drive time is about 3 Â½ h but doesnÂt include the border crossing. So prepare for a longer journey.