Getting from Cairo to Luxor 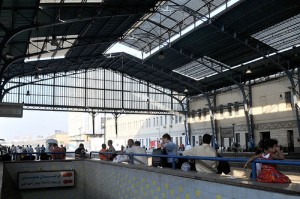 Cairo is the capital of Egypt and one of the largest cities in Africa. Cairo is famous for being the gateway into the Giza Pyramids , for having a wonderfully well preserved medieval Islamic city and also being home to Coptic sites in the Old City. The Egyptian Museum , along with the famous bazaar only add to the charm of this metropolis.

Visiting both cities , along with their most important historical sites, is what pretty much every traveler does when in Egypt. So, itÂs a good idea to know how to travel between the two cities and what to expect.

The safest and cheapest way to get between Cairo and Luxor is by train. Choose the sleeper if you want to maximize your time on the road, or the daytime train if you want to see the sights along the way.

Cairo International Airport (CAI) is the busiest airport in Egypt and hub for EgyptAir. It is located about 15 km from the business center of Cairo. CairoÂs airport is the second busiest in Africa and has four terminals. Connections to down town can be quite hard to find, unless you plan to take a taxi. There is a public bus option but the lettering is in Arabic so itÂs going to be an adventure to find the one which stops where you want to get.

Luxor International Airport (LXR) is the main airport serving the city and is located 6 km from the city center. It is not a hub for any airline but itÂs used mostly by charter airlines which take tourists to the Valley of the Kings.

The only airline offering flights between Cairo and Luxor is EgyptAir. The flight time is about 1 h. The single fare in early November 2012 Â during winter, best time to visit Egypt Â is US$121. Return flights start at US$246.

>>book a flight to Egypt

Trains from Cairo to Luxor

All trains to Luxor depart from Giza Metro-Train Station in Cairo, which is not the main railway station in the capital (that would be Ramses Station). As a general rule, trains rarely run by schedule. And yes, they are always late.

Tickets can be purchased online here and make sure to get the ticket in advance (in order to be assigned a seat). There are four type of trains connecting Cairo to Luxor , but the express (marked Speed AC on the official website) and the sleepers are recommended for the travelers. The travel time between the two cities is about 10 hours, so using a sleeper is a good way to maximize your time on the road (and save money).

Schedules tend to be changed so run a search on the website mentioned above to get the latest schedules and plan accordingly. Single fares start at 47.84 Egyptian Pounds / US$8.

Buses from Cairo to Luxor

Did you think that the train schedules are not reliable? Think again because finding the bus schedules in Egypt is close to impossible. The only place to actually find a schedule is in the bus station.

From various websites, we manage to find some information, but please use it carefully, as a general guide to planning your trip. The bus to Aswan passes through Luxor and there are quite a lot of buses per day. The price is 47 Egyptian Pounds / US$7.8.

Driving from Cairo to Luxor

You can rent a car in Cairo and drive the 653 km to Luxor. Driving in Egypt can be quite an adventure so itÂs advisable to either get a driver or take someone with you who can read Arabic. The driving time is about 8 Â½ h (according to Google Maps).